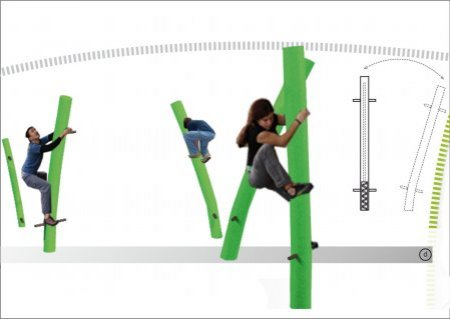 Multisensory, stimulating play area, created with the respect of the unique environment of the John Leigh Park.
Child play that allows to express and explore, discover and learn.
An environment attractive for both children and adults.

To preserve the unique character of the John Leigh park, the project uses shapes, forms, images, mechanisms, forces and phenomena that exists in the park already and incorporates them to create a new play environment and new spatial identity.
The elements of the playground are in the constant dialog with the park environment.
The dialog is based on the colors forms themes etc. Some elements are simply inspired by the shapes of plants growing in the park, some are imitating the natural mechanisms, others are the exact print outs of the chosen corner and gain a new function, by being simply replaced. The colors of the play equipment are found in the park landscape and used for the playground color range. The new kids area teaches the children to understand the natural rhythm of the park, the vegetation cycle, secrets of nature yet encourages great, unlimited fun. The new play area inspires both children and adult park visitors.

Project description
The new child play space has an open character. The project maintains the existing natural paths that lead to the playground and define the entrances. The area is enclosed by the difference of the topographical level and also by the concrete seat/fence. The play facilities are placed according to age groups* 5-7, 7-10, 10-15. Each zone is protected by the tarmac fulfilling the security norms. The tarmac has a different color for every age group. The visual sign system on every element of the zone equipment tells the minimum age required to play. The parent is able to surveillance the children playing in different parts of the playground thanks to the Surveillance mirrors placed all over the place.