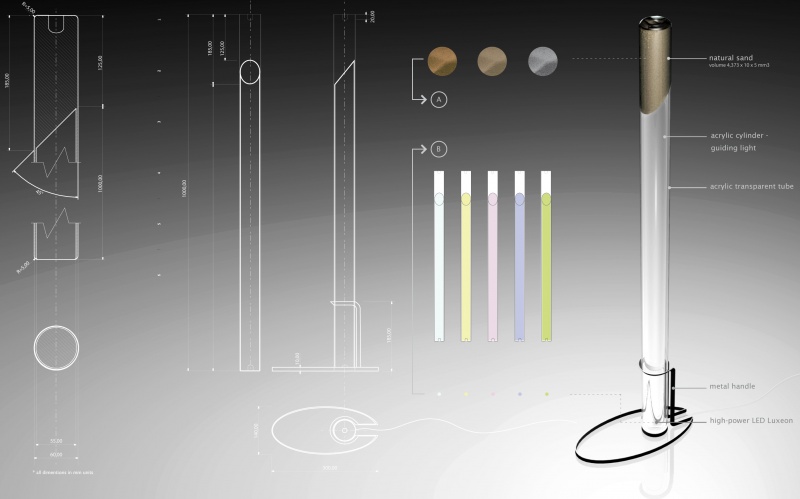 Lost Light is a light object that brings up the question of the light consumption. Today we all are conscious of the energy consumption considering the electric equipment such as electric heaters or kitchen appliances, yet we forget about the light. Traditionally the consumption of light was very visible. For example when the oil inside of the oil lamp was over, the light was off. We could see the process of the oil consumption with our own eyes. We could tell how much longer would the light last. When the candle was lit, it was getting smaller and smaller until it completely disappeared, so the process of the light consumption was extremely present. Today when we turn on the lights, we don’t see that the energy is being consumed because the light is separated from its fuel. Lost light is a metaphorical trial to remind the user that no matter how it looks, whenever the light is on “the candle is getting smaller”, even if the candle of our times is actually a power station.
Lost Light translates the energy usage into a physical act. It restores the image of the light consumption separated by technology from domestic lights. It encourages the sensorial experience with light. The need of interaction to keep the light on does not let us forget that every single light is constantly using the energy.

Structure
Lost light consists of a single LED, a transparent acrylic tube and an acrylic guiding light cylinder inside of it. It is based on a metal handle. While being lid the cylinder is getting shaded by the sand dropping slowly from the top of the tube down around the cylinder. The light is slowly fading. Within an hour the whole cylinder is shaded. To keep on lighting, the user has to turn it up side down so the sand gets back to the first position and slowly uncovers the lighting surface. And then it starts again and again and again…
«