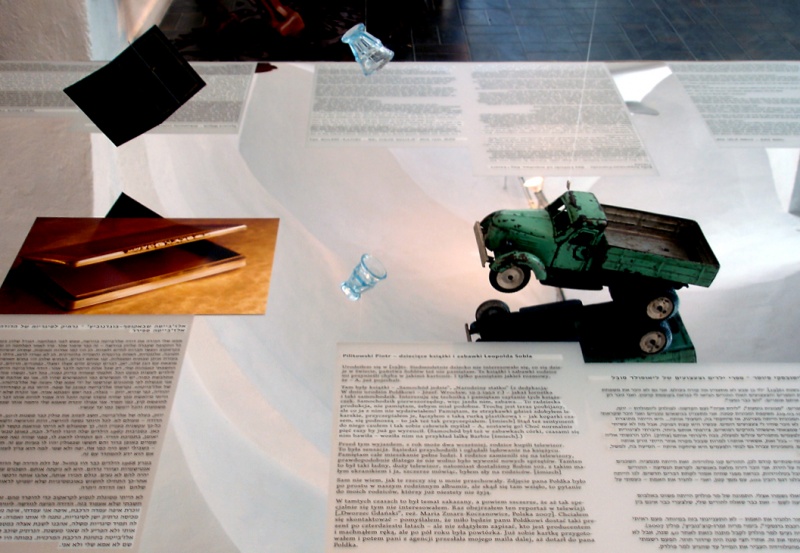 In March 1968 the communist authorities in Poland launched an anti-Semitic campaign which forced over 14 thousand people of Jewish descent to emigrate. They left for Israel, Scandinavian countries, United States and France, simply they dispersed around the world. The anti-Semitic propaganda controlled by the officials as well as brutal treatment on the part of the communist secret Police, contributed to a witch-hunt atmosphere and mass fear which left deep wounds in Polish society as well as feelings of bitterness and injustice in those who left Poland. The exhibition "March 68. Farewells and Returns" is an attempt at re-thinking and reliving this sad history lesson.
Installations created by Malwina Antoniszczak for the exhibition were based on the documentary research done by the group of Israeli and Polish students who took part in the documentary workshop organised by the Adam Mickiewicz Institute.

Exhibition in Jaffa by Mateusz Werner
The ceremonial opening of the exhibition "March 68. Farewells and Returns" took place on the 19th of May in Horace Richter Gallery.
Interest about the exhibition was beyond our dreams. More than 300 guests attended the opening, among them the representatives of the Polish Embassy and Polish Institute in Tel Aviv, the participans of "Reunion" in Ashkelon, which gathers the community of the March emmigrants from all over the world, and also lots of our friends and colleagues from Israel. Of course the workshops' participants were there: students and tutors. They presented all their works.
There was a lot of touching moments, guest were recognizing themselves in the old photographs and the past was there again. But there was also fun – the audience of the film "Happy Jews" by Jonathan Rozenbaum was laughing and everybody was greeting their old friends they have not seen for a long time
The students were finally happy that their two years lasting work can finally be shown to other peopple.
We would like to thank all people who made it possible.
Thank you: young participans of the workshops, who worked really hard for two long years.
I would like to thank the tutors of the workshops, specially Viola and Jozek Wein, who from the very beginning supported us with good advice and ideas. Poldek Sobel – our source of wisdom, who opened the whole community of "Plotkies" to us and Maciek Drygas, who was patiently consulting all works.
I also would like to thank Against Gravity for two years of cooperation.
Thanks! It was worthed.
Mateusz Werner