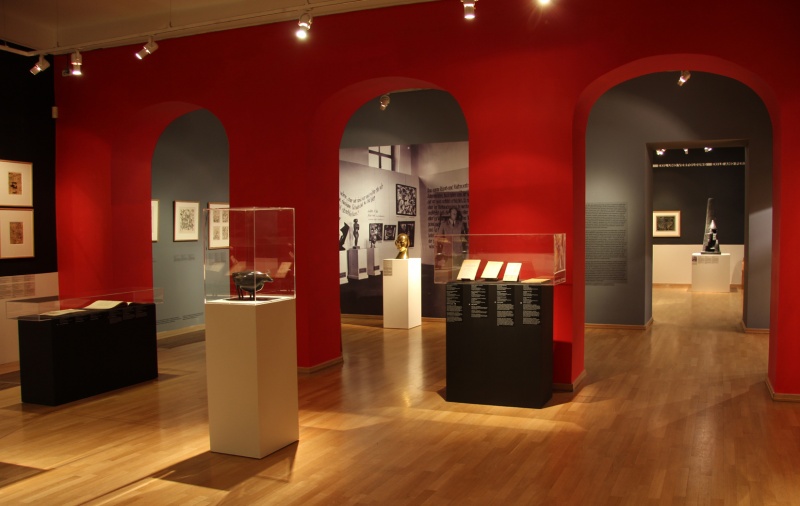 About the exhibition design:
The exhibition Hunting down Modernism. Prohibited Art in the Third Reich at the ICC in Krakow presented works of artists castigated by the Nazi propaganda as degenerate. The infamous exhibition Entartete Kunst in 1937 in Munich included over 650 artworks collected by the Nazis from nation’s museums in Germany. As designers we had to find a way to tell the dramatic events of the 1937 exhibition in Munich and at the same time to show the collection of works chosen for Krakow exhibition. We decided to create a double narrative path to show two stories, the story of the 1937 show and the works themselves. We translated this idea into two horizontal stripes that divided all walls of the gallery. The white stripe was a background for all text, quotes and stories of the 1937 Entartete Kunst and artists’s opression, the dark stripe was a background for all works. We have also created an additional installation that allowed the visitors to peek in the 1937 actual exhibition. We have prompted curators to include in the exhibition rare film footage from the 1937 Entartete Kunst exhibition that we’ve found in the United States Holocaust memorial Museum archives. We’ve placed the film in front of a wall size photo print from the 1937 exhibition. For the design of every room in the gallery we've chosen a limited number of colors: black, white, grey and red.

Wirtual tour of the exhibition

Film from the opening

About the exhibition:
Art is relative; it reflects the spirit of the age, creates opportunities for debate, is popular or provocative, conforms or resists. Irrespective of the reception of its innumerable forms and possibilities, art has always had its opponents, who would question new trends and attempt to enforce thought in line with an ideology. It has always been totalitarian systems that have felt most threatened by freedom of spirit and sought ways to stifle it. Public denunciations of artists and bans on their works are standard measures in the repertoire of such states. Campaigns vilifying artists and their works reached their apogee in the years 1933–1945, when National Socialist cultural policy enabled state instrumentalisation of all areas of art.

The period of the Third Reich was a time when people were hunted down like wild animals, humiliated, driven out and murdered. Among those who suffered in this way were artists both well known and unjustly forgotten today, representatives of all disciplines of art, who because of the modern means of expression they adopted, their aesthetic choices or their political views came into conflict with the aesthetic and ideological ideal of the “German” artist. This was sufficient reason for the National Socialist state to implement repressions against them. State-sanctioned persecution was made possible by new laws, and by the creation of a Third Reich Chamber of Culture, whose various departments engineered the subordination of art to the exclusive service of the state and its reputation.

Recently there have been numerous exhibitions of forbidden art, presenting the work of artists such as Max Beckmann, Karl Schmidt-Rottluff and Otto Dix. Few curators have taken the step of treating the visual arts, literature and music on a par, however, and fewer still have presented work by artists now forgotten. The guiding principle behind the interdisciplinary exhibition Hunting down the avant garde. Forbidden art in the Third Reich, then, is to show on the one hand the complexity of the National Socialist cultural policy system, and on the other works by artists both well known and forgotten today, persecuted, expelled and excluded just like the Third Reich’s many other victims.